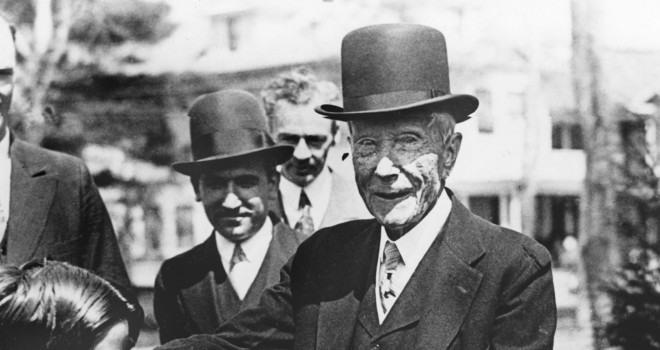 John D. Rockefeller spent his life giving away vast fortunes yet by the time died in 1937, his assets equaled 1.5% of America’s total economic output. To control an equivalent share today would require a net worth of about $340 billion dollars, more than four times that of Bill Gates. Eventually his state to state empire Standard Oil Co. grew to country to country, plotting from 26 Broadway entire ocean fleet of tankers transporting millions of gallons of oil. Standard oil had 4,000 miles of pipeline, 5,000 train tank cars and employed over 100,000. The company was so large when the Geodetic Association announced plans to measure the earth it would enable the trust to learn the exact size of their property. So how did he do it? I believe the answers can be revealed in these three categories exposed in the 676 page biography TITAN by Ron Chernow, here is what I learned:

Faith: John D. Rockefeller was drawn to the church, not as some nagging duty or obligation but as something deeply refreshing to the soul. At age 20 he solicited every possible church member to give and help save the church from foreclosure, later admitting “I contributed what I could, and my first ambition to earn money was aroused”. His early hopes were to someday become a Baptist minister, favorite song being I’ve Found A Friend, oh, such a Friend! He bled, He died to save me. “I was trained from the beginning as a boy by my minister to work and to save” Rockefeller explained. “I have always regarded it as a religious duty to get all I could honorably and give all I could.” In his church, he could be found sweeping out the halls, cleaning the sidewalks, ushering people to their seats, studying the Bible or many other duties. He studied his Bible regularly and diligently, and he knew what was in it. His charitable giving surpassed the 10% mark in his early twenties, one entry notes contributing money to a black man in Cincinnati in 1859 so he could buy his wife out of slavery signifying his convictions  went against popular ideals if necessary. Even as his children went to school, he matched to a black scholarship student whose education was paid for by the family. Rockefeller believed his gifting from God was to make money, once quoted “I believe the power to make money is a gift from God – just as the instincts for art, music, literature, the doctors talent, the nurse’s, yours – to be developed and used to the best of our ability for the good of mankind. Having been endowed with the gift I possess, I believe it is my duty to make money and still more money, and to use the money I make for the good of my fellow man according to the dictates of my conscience.” In Rockefeller’s travels, he liked to drop in on black Baptist churches, often leaving a substantial donation in his wake. Sometimes on vacation he would search for a good tent meeting. Rockefeller’s faith in God was contagious, once in a heated boardroom as things looked uncertain, he pointed skyward and said “The Lord will provide.” And He did. Always grounded in faith, when someone expressed surprise to Rockefeller that he had not gotten a big head, he would reply, “Only fools get swelled up over money.” Rockefeller’s contributions to medicine completely eradicated hookworm. Eventually his labs stamped out boll weevils and improved crops all across the south.

Family: Born with no silver spoon Rockefeller lived in a 16’ x 22’ house with torturous rocky fields to plow. Humbling surroundings caused young John to dream, one day strolling by a river with a friend, he blurted out “Some day, sometime, when I am a man, I want to be worth a-hundred-thousand-dollars. And I’m going to be, too-some day.” You can only imagine the friends reaction as John and his brother were excluded from the class photos because their suits were too shabby. Rockefeller’s first love was ended when her parents argued that they didn’t want their daughter to throw herself away on a young man with such poor prospects. His Grandfather was a terrible drunk, his uncle once won a $5 bet by staying sober during an entire trip to town. His brother Frank who John D. made very rich as an adult also struggled with alcohol, and no matter Frank’s financial success always resented John D. for having more. Years later when teaching his Sunday school class Rockefeller would say “Boys, do you know why I never became a drunkard? Because I never took the first drink.” Rockefeller’s father was absent leaving months on end, always engaged in some type of less than legitimate endeavors like selling “healing medicine” and calling himself a doctor. This instability had a 7-year-old Rockefeller contributing silver and copper coins into his mother’s blue china bowl from the sale of chicks he had raised. Rockefeller’s school mates described John as “forgettable” and always seemed to be thinking, patient, slow to learn, but persistent. Rockefeller’s only noble role models were his Grandmother and Mother an avid Bible reader who once moved the family from a drunken single church town to a more stable Godly environment. His mother taught young Rockefeller how to reflect coolly before making decisions “We will let it simmer” was a saying John employed throughout his business career. Rockefeller loved his wife and credited her with all his success saying “Without her keen advice, I would be a poor man.” Valuing time, Rockefeller preferred being with his family at home, even if snoring in his easy chair than going out for the evening, he especially enjoyed the company of ministers. Not wanting to spoil his children, Rockefeller insisted they share a bicycle. Once Bessie his daughter was at a shop with some classmates to buy a present for the teacher, discovering they were a little short on enough money, the shop owner soon discovered who her father was and gasped “John D. Rockefeller in the oil business is your father!” then agreed to extend credit and deliver the gift. Later Bessie admitted that she thought that was strange but Rockefeller concealed his vast fortune from his kids. Every morning before breakfast he led the family in prayer, meting out a penny for latecomers, everyone took turns reading the Bible, his wife Cettie explained difficult portions and prayed for guidance. With philanthropy, Rockefeller would often involve the entire family including the children with disposing of his fortune. He knew “Great wealth invariably proves to be one of two things – either a great blessing or a great curse.” The volume of begging letters was unimaginable and almost unbearable for him, one boat from Europe brought 5,ooo. He preferred wholesale giving, as opposed to small, scattershot contributions. He told a friend “I am more and more satisfied no member of a church can afford not to contribute as the Lord prosper him.” Underwriting a black women’s college in Atlanta was another passion, writing “I hope they will in addition to searching knowledge from books, strive to learn to do all kind of work, and better than any other class of men.” Spelman College years later graduated Martin Luther King Jr.’s mother and grandmother.