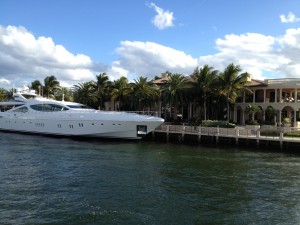 A tour guided water taxi took my wife and I along the waterways of Fort Lauderdale, Florida, we passed world renowned mansions, marinas and mega-yachts along the way. Our tour guide made jokes and criticized how the owners made their money or how some were uneducated and must have achieved their wealth by the luck of the draw. I so badly wanted to stand up taking the microphone and say something like this:

Ladies and gentlemen… the majority of wealth you see before you is first generation and nothing these people have achieved is beyond your reach! Look at what freedom in our great country can afford you! These people simply solved problems and brought value to the marketplace! These people employee thousands around the globe! Most of these people are known to be very generous to charities! Thankfully, America gives more than every other country in time of disaster – these people contribute greatly to that need! Believe that you can succeed, but know it will never be by demand nor are you entitled to it!

We all should’ve stepped off the boat with renewed dreams inspired to take on the world. Instead people left with a “that can never happen to me” spirit. I know that not all of the showcased residents probably made their money in the most upright fashion, but most likely neither did everyone on the taxi; the amount of money made does not make the method more or less noble. I hope the tour guide one day realizes if it were not for the ones he criticized and made jokes about, he would not have a job and one thing is for sure, he will not likely achieve any more in life unless he eliminates the entitlement mindset. Entitlement suggests success should be shamed and entitlement is always jealous. Jealousy is dangerous, just ask Saul whom kept a jealous eye on David 1 Samuel 18:9 and ran his kingdom into the ground.

Because of this I celebrate the success of others, and this includes you, so congratulations! What are some of your successes? Who that you honor would you like to acknowledge?